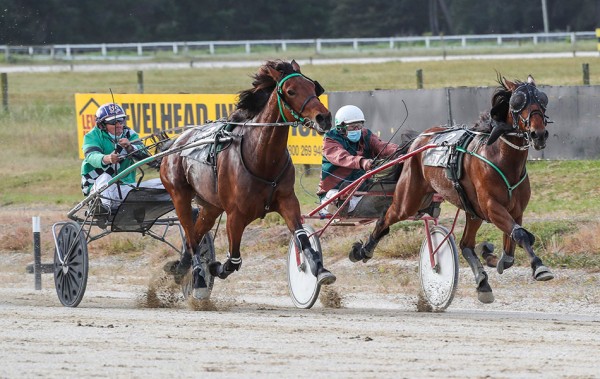 Maui’s win at Rangiora on Friday suggests he and trainer-driver David McCormick are in for a busy, but fruitful summer.

The three-year-old bounced back to the kind of form that saw him qualify and race in the Harness Jewels with a polished performance to win race 10.

That prompted some head-scratching by the trainer.

With his horse healthy and well it became clear that Maui just needed a little more fitness under his belt going into the busy spring and summer racing period.

“I was that unimpressed with him on Monday that I took blood off him just to see what’s going on.”

“I probably take blood off them every three years whether they need it or not, so for me to do it I was concerned.”

“But when he pulled up he was blown up over the back, so he is obviously just short of work.”

“You can work them at home but you don’t want to bust their guts.”

“It is a bit like the All Blacks, you can train until you’re blue in the face, but you can’t beat game time.”

Maui’s fitness levels and his form are peaking just as the New Zealand Cup Carnival has come along.

That means he’s earned a start on Show Day.

“He will go to Show Day now, he could have gone to Cup Day but I decided after his run on Kaikoura Cup Day that I wasn’t happy with him so I withdrew him.”

“Today was a good result, it wasn’t a stake like you’d get on Cup Day but when you are only getting half (rating) points as a three-year-old it is pretty good.”

McCormick plans to make the most of the chance to bag more three-year-old wins with Maui which means he is in for a busy time on and off the track and the trainer looks to keep improving his fitness levels.

Maui began perfectly on Friday after putting in a couple of eye-catching bounds behind the tapes this time in, but McCormick has full confidence the trotter can develop into a good beginner.

The three-year-old enjoyed a perfect run in the trail for his trainer, who races Maui with his wife, Elizabeth.