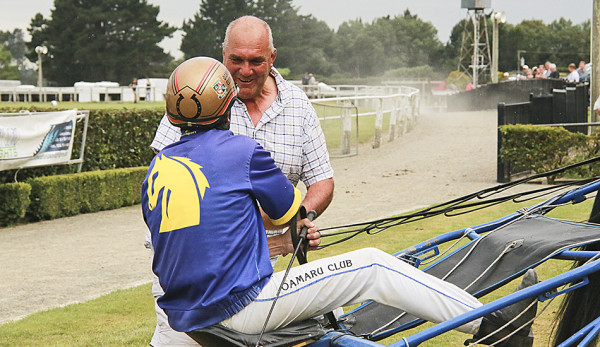 Emotions ran high at Ascot Park on Wednesday when Deus Ex completed a fairy-tale finish to the training careers of Roxburgh couple Geoff and Jude Knight by winning the Northern Southland Summer Cup.

The dream ending to a professional training partnership that has spanned almost twenty years came courtesy of an outstanding and typically aggressive drive by the Knights’ long-time stable driver Matthew Williamson.

Williamson punched the air in jubilation after completing his special victory and was greeted by an emotional Geoff Knight when returning to the winner’s circle.

“I am absolutely over the moon and a wee bit emotional,” Knight said.

“It is our last day of training today, we have decided to pull the pin on training to change our lifestyle.”

“To go out like that is something pretty special.”

Williamson left nothing to chance on the Knight stable’s final day at the races.

The reinsman sent Deus Ex around the field at the 1300m before taking the lead from the favourite Watch Me Now.

The five-year-old then dug deep in the straight to send the Knights off in style.

“He is a good horse, I said right from the time he was a three-year-old he could be the best horse I have trained,” Knight said.

“A horse like Pembrook’s Delight, she is obviously the pinnacle winning a group 1.”

“But she wouldn’t have done what he did today.”

“He is a very, very special horse.”

After learning their craft in their native Counties region, the Knights started training horses again as a hobby after moving to West Otago and continuing careers in the police force.

After moving to other professions the couple eventually became public trainers after getting persistent inquiries from owners to take on horses.
As the stable built, the couple formed a strong relationship with a then-rookie driver in Williamson.

“I remember the first time Matty ever drove for us, it was a horse called Omaha Beach and he won,” Knight said.

“Today to come out and win like that is special.”

“He has been with us a long, long time and been very loyal.”

In recent seasons the Knights have scaled back their racing team and taken on a mail contracting run around Roxburgh.

The couple will continue their postal work and be allowed a more relaxed lifestyle without training horses.

They still plan to be actively involved in the industry as breeders and owners.

“We are looking for a change in lifestyle.”

“Things have become a bit awkward for us where we are training at the moment.”

“And rather than make a big fuss we have decided to pull the pin.”

“The game is bigger than us all and we have decided to do other things.”

Geoff Knight plans to see out his current term as head of the southern branch of the national trainers and drivers association.

He will remain on the board of the Southern Harness organisation after being elected recently.