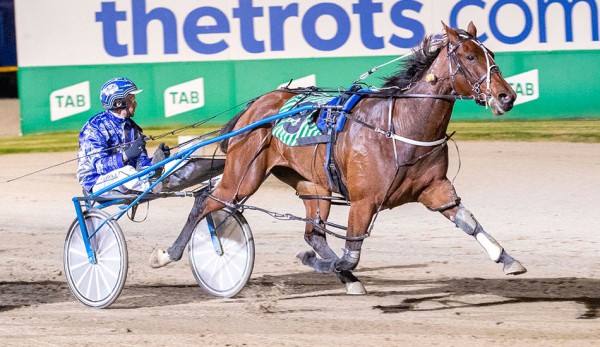 Trainer Nathan Purdon revealed the five-year-old was headed back to the spelling paddock.

“Before we do, we’ll have some precautionary bone scans just to make sure there’s nothing really serious at play,” he said.

Purdon had Spellbound close to racing again after she injured her back in a mishap which forced her out of last month’s inaugural The Race at Cambridge.

“We thought she was headed in the right direction and gave her a solid workout,” he said. “She worked well, but she wasn’t quite right the next day and the original issue may have flared-up again.

“It doesn’t seem anything serious. I’m sure we could race here now and she’d be very competitive, but she’s been too good to us and the owners to do that.

“We’ll get her looked right over, give her some time out and start again.”

With Amazing Dream gone to the US and Spellbound sidelined, another former Kiwi “girl” Amore Vita steps into the stable star tag.

And the three-year-old filly returns to racing at Melton on Saturday night.

It will be her first start since finishing second to Just Hope in February’s NSW Oaks final.

“She ran well there, but she’s better than she showed in that final,” Purdon said,.

“She probably needed a break by then and I’m pleased to say she’s thrived during the time out. She’s really filled-out.

“I’ve always really liked this filly and felt she would just keep getting better with time. It’s great she spelled so well.”

Amore Vita has already built an impressive record with 10 starts for Purdon netting seven wins, two seconds and a third.

She won the Vicbred final at Group 1 level as well as seconds in the Breeders Crown and NSW Oaks.

“Whatever she does this week she’ll improve on. She’ll probably take a couple of runs to get back to her top, but she’s such a great athlete I’m sure she will still be very hard to beat.”

Amore Vita back racing now with a view to a Queensland Constellations winter raid.

“There are a couple of $30,000 lead-up races into the Queensland Oaks, so it should be ideal,” Purdon said.

“We’ll give her a couple of runs here, so she’s raring to go when she heads up there.”

In other stable news, Purdon said he had a couple of two-year-olds in this crop he had time for.

“There’s a Bettors Delight owned by Danny Zavitsanos we quite like and a Vincent as well,” he said.

Meanwhile, Purdon is enjoying the success of Amazing Dream in the US where she is two-from-two.

She is chasing a third win at The Meadowlands on Sunday morning (NZ time) when she meets two of the US's best mares, Test Of Faith and Racine Belle, in a select six-mare field.

"I'm thrilled for Linda (Toscano, trainer) because when you take on mares like Amazing Dream with the great record they have, you're sort of in a no-win situation," he said.

"I've spoken to Linda a few times since the mare went across and it's great to see her racing so well."