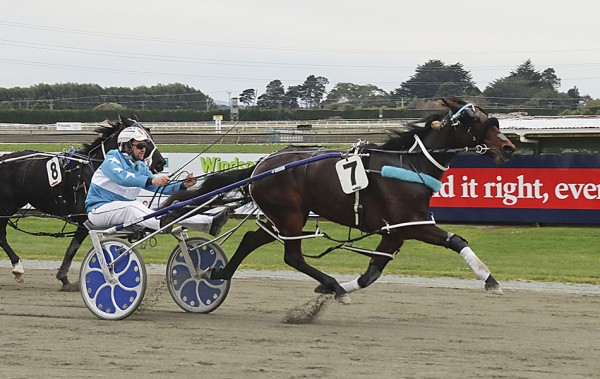 One of the biggest challenges of Chelsea Faithful’s training career awaits after she produced Ideal BB for a fresh up win at Ascot Park on Saturday.

The Winton horsewoman strengthened her already impressive season’s strike rate when the four-year-old burst home from off the speed for a stylish win in race 5.

In doing so the pacer continued the successful combination between Faithful and Dunedin owner Dr Onn Chin.

Ideal B B caught the eye going into her first start in almost a year with a good performance in a recent Winton workout.

While Faithful was hopeful the pacer could start his new campaign on a good note and got an added bonus when she won.

“She’d had a couple of workouts and I was quite happy with the last one, but she caught me off guard a little bit in her first one.”

While Ideal B B also impressed plenty of onlookers at Ascot Park, many were left concerned when the mare pulled up quickly on the inside of the track shortly after her victory.

Faithful wasn’t among those who were concerned.

She missed the incident on her way to the winner’s circle and was greeted by her mare, who was uninjured, but missing a front shoe.

“I had stopped watching and everyone was saying ‘what happened to your horse she looked like she broke down’,” Faithful said.

“She pulled a shoe just before the finish putting in a couple of rough ones.”

“It looked a lot worse than it actually was.”

The shoe was quickly replaced after the race by farrier Brendon Franks.

Faithful’s six wins from 31 starts puts her strike rate in the top bracket of New Zealand trainers this season.

She hopes to add to it and notch another accomplishment for the season with her first starters at Addington.

Faithful will head to next week’s night of Group One racing to target an undercard race with Pay Me Speedy.

“It will be good, but it is a bit nerve-wracking to be honest.”

Faithful took over the training of Ideal B B from Kirk Larsen after the mare needed a change of scenery.

Larsen also cashed in at Ascot Park on Saturday when producing his talented but tricky trotter Tolkien to win race 7.

The five-year-old is well known as a horse with ability and a tendency to make mistakes, as he did at last weekend’s Diamonds Day meeting.

The four-year-old quickly turned his manners around on Saturday to produced a dominant victory.

“He had been been pretty good, when he catches it right he is pretty good and he loves the mobile,” Larsen said.

“Today I thought he might have been right because he was on the second row and he had one to follow out.”

“That takes his mind off things.”

“And that is exactly what he did – he shot right through at the start.”

Tolkien has produced good performances for a second and a fourth going into Saturday’s win.

With an inform trotter on his hands, Larsen plans to keep racing the five-year-old as winter approaches.

“He had gone near enough before he missed away last weekend.”

“He was a rating 47 going into today so we should still be able to find races for him.”

“He has got all the ability there but his manners have let him down.”

Larsen’s son, junior driver Tristan Larsen shares in the ownership of Tolkien, who races in his colours.