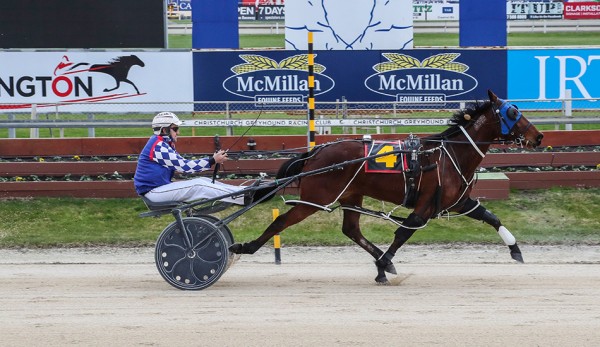 Amber Hoffman made a near perfect start to the season on Sunday.

The Waikouaiti trainer took two horses north to Addington Raceway and came home with a win and a second placing.

“It was a really good start to the season,” Hoffman said.

“I expected a nice run from the filly (Miss Fiona), and it was great with Owes Me Dough because I wasn’t expecting him to go so well in his first start outside of maidens.”

Miss Fiona cleared maidens at just the third time of asking and Hoffman said she took plenty of confidence out of her debut placing in June before she was luckless when unplaced at Addington last month.

“She just got too far back last start,” Hoffman said. “She had a good draw (4) today so we took advantage of it.”

Driver Nathan Williamson launched the daughter of Captaintreacherous off the gate to take an early lead where the Southland reinsman was able to dictate terms throughout and guide his charge to a comfortable three length victory over Younggiftedandblack, with a further five lengths back to Floras Diamond Deal in third.

“Nathan is such a professional out there,” Hofffman said. “He just dictated and it all just worked out perfectly.”

Hoffman was also pleased with the way stablemate Owes Me Dough ran home for second in the following race.

“I was happy with the way Jonny (Cox) drove him. He looked after him,” Hoffman said.

“He is still a bit dumb, but he will just improve with age.”

Hoffman will now see how both runners pull up after the race before deciding their next assignments.

“We will just see how they both pull up in the coming days,” she said. “Owes Me Dough probably won’t back-up for a couple of weeks, he needs a few weeks between runs.

“Miss Fiona may go to Wyndham or Addington.”

Hoffman is pleased with the way her season has begun, and she is now looking forward to the coming months with her southern team.

“We have got some nice bread and butter horses there, so we should have a bit of fun this season,” she said.