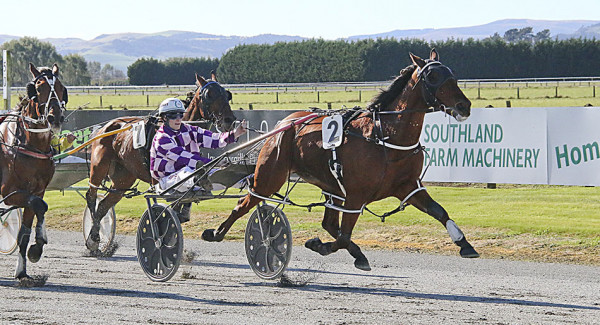 It might be a case of rugby, racing and beer for junior driver Max Hill following his win with Mach’s Back at Winton on Saturday.

Hill produced a pinpoint drive behind the sprint specialist on Wairio’s Mile Day when controlling his race in front and unleashing the seven-year-old for a sharp final 400m.

Mach’s Back has been in brilliant form this year after returning to his best with a huge late-closing effort at Cromwell in January.

His work leading into Saturday’s win confirmed the pacer is still in a really happy space.

“He has been doing everything right down the beach, his work has been awesome,” Hill said.

“We had been really happy with him and he just carried that on today.”

Mach’s Back and Hill have both had a stable change of sorts recently with trainers Tank Ellis and Kirstin Barclay reverting back to training on their own accounts.

Mach’s Back is now prepared by Ellis and Hill works for Barclay.

Barclay has a nice team of horses around her and one of the focuses at the moment is breaking in young ones.

“I am enjoying it there,” Hill said.

“There are some nice young horses coming through and we are breaking in three at the moment.”

Hill, the son of Canterbury trainer Brendon Hill, plans to return to Canterbury for a two-month stint with Mark Jones’ stable when the Southland harness racing circuit quietens down over winter.

He also plans to play rugby for the West Melton Rugby Football club while he is back home.

Several three-year-olds boosted their hopes ahead of next month’s Diamonds Day meeting with victories at Winton on Saturday.

Leithen Burn and Tommy Waterhouse moved to fifth and sixth place, respectively, on the Southern Supremacy Stakes qualifying leader board with wins with Blair Orange in the sulky.

Leer won her way up to fourth placing in qualifying rankings for the Southland Oaks Final.

So Art I boosted her hopes of making the Group Two feature with a victory that put her in 14th position.

The filly needs to start again at a Southern Harness meeting to qualify for the Diamonds Day feature.

Trainer Steven McRae plans to do exactly that and it will be at Winton next Friday if the filly comes through her win well.

“She is still pretty untapped so I would like to think she would improve a bit.”

“She will have to if she is going to end up where we want to get her to.”

“The Southland Oaks is the first aim, we are probably cutting it a bit fine.”

“She will probably have to come out and win her next start, which won’t be that easy.”

“If she makes it that is great and if she doesn’t we won’t be too worried.”

Bred and owned by Timaru vet Donna Williamson, Belmont Diva is a full sister to smart Canterbury pacer Belmont Major, who has recently been sold to the USA.