Hat-trick for Spirit Of St Louis 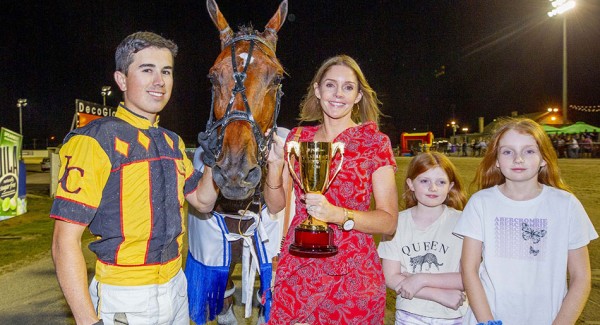 What a ride former Kiwi pacer Spirit Of St Louis and young gun driver Jack Callaghan are sharing together.

Callaghan had only even driven Spirit Of St Louis in trackwork before taking the reins in the Bendigo Cup just over two weeks ago.

“I always wanted to drive him at the races if the chance arose because he feels so great at home (trainer Belinda McCarthy’s stables),” Callaghan said.

“I jumped at the chance when it came at Bendigo and haven’t wanted to get off since.”

Co-trainer Luke McCarthy revealed he gave Callaghan the chance to drive back at Menangle last Saturday.

“He can get a full book there and we had some nice drives for him, but as soon as ‘Louis’ drew the pole, Jack was adamant he wanted to drive at Ballarat,” he said.

Spirit Of St Louis has always been renowned for his high speed and rated a couple of lengths below the likes of Team McCarthy’s biggest guns in King Of Swing and Expensive Ego, but it’s clear he’s gone to a new level.

“He’s really thrived since the Inter Dominion. It was great grounding for him,” Belinda McCarthy said.

That grounding and race fitness, capped by a stunning Callaghan drive (again), proved the difference.

It was as good a race as you’d see.

“It’s not my first Group 1, but it’s by far my biggest win. These are the races you grow-up dreaming of winning.”

It looks almost certain Callaghan will stay aboard Spirit Of St Louis for the Hunter Cup on Saturday week.

Lochinvar Art will be fitter for just his second run back after 11 months out, Expensive Ego will strip fitter for his first run in six weeks and Amazing Dream showed again she was right there with the best of the boys.

Throw in King Of Swing as the “fresh blood” and this will be some sort of Hunter Cup.

Trainer-driver David Moran said Lochinvar Art “blew-up across the back a lot” after his brave third after making three runs in the Cup.

“I’m glad I’ve got the two weeks between runs now. He can recover a bit and then I’ll drill him down. I don’t think I’ll have the very best version of him for the Hunter Cup, but he’ll be close to it,” he said.

“He’s clearly going to take more racing than I first expected he would to get back to his very best.”

Another eye-catching was former classy Kiwi pacer Triple Eight, who got shoved five and six -wide trying to evade tiring horses on the final bend and closed strongly late for fifth.