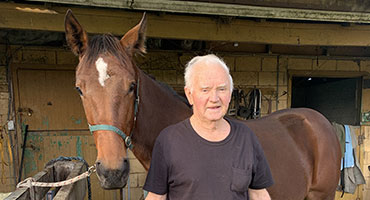 The 81-year-old from Takanini, who will forever be associated with trotting superstars Petite Evander and Pride Of Petite, has decided not to renew his trainer's licence.

"Snow" as he's known - "because my hair was always white and the name stuck" - won't be lost to the game entirely, as his stepson Peter McCormick is applying to get a trainer's licence and intends to work two of Weaver's horses from the South Auckland stables Weaver's called home for the past 41 years.

"He will get my sulky and take over my race colours (red and white stripes with yellow sleeves)."

His first introduction to racing was through his father who was a steward at the Auckland Trotting Club for many years.

In 1962 Frank Weaver was offered his pick of a couple of broodmares at the Hawera races and went for the stock of Light Brigade. It would prove a pivotal moment for the then 20-year-old. The horse in question was the unraced Thearle. Eight years and four foals later Thearle and subsequent Hall of Fame inductee Great Evander produced Petite Evander.

"I lived in a state house at the time and broke her in in the front yard under the clothesline!"  (see photo above)

Guided by two of the sport's legends in trainer Roy Purdon and champion driver Peter Wolfenden she raced in New Zealand for three seasons, winning 21 times in 72 starts. She was New Zealand's first two minute trotting mare on home soil in 1:59.8.

Inspired by the success other Kiwis like Charlie Hunter were having in North America Frank Weaver decided to try his hand there too.

What followed was six unforgettable months when Petite Evander racked up win after win. They even got to the biggest trotting race of them all, the Elitlopp in Sweden where Petite Evander won the Consolation Final.

But another star was not far away.

"I was told a long time ago that you only get one champion in your lifetime. I was very lucky, I got 2," says Weaver.

With Petite Evander now in the broodmare paddock in the United States she was served by American stallion Royal Prestige. The result was one of this country's greatest trotting mares in Pride of Petite.

Altogether she raced from age to 11, winning 35 times from 142 starts. She competed in a remarkable six Inter Dominions (winning twice). She was rewarded by being named Trotter of the Year in 1996/97.

Like her mum she too went to the Elitlopp, becoming the first and so far only Australasian trotter to have made the Grand Final. She finished sixth.

She was also successful as a breeding proposition, producing eight foals before her death last year.

Among her progeny was Petite Sunset (7 wins), Petite Sunrise (four wins) and Our Dainty Lady (5 wins). Petite Sunrise won the first ever Harness Jewels Ruby on her way to being named 2007 2YO Trotting Filly of the Year.

While Weaver says "it's a bit sad for me to give up training" he knows it will free him up to enjoy his leisure time with long-time partner Marilyn.

"We've been on 17 cruises, the next one is to Panama and Mexico."