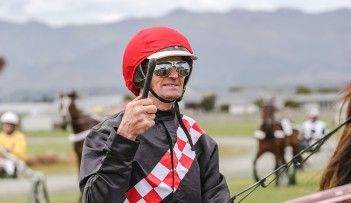 A road closure on Sunday halted David Butt’s plans on a return to the sulky at Westport, but he will have no such drama on Tuesday when he heads to the second day of the West Coast meeting to drive Masterly for cousin Paul Nairn.

With Butt waylaid en route to Westport on Sunday, Nairn hopped in the bike himself to steer Masterly to a 2-3/4 length victory on debut in the BP2Go Trot (2600m).

While disappointed to miss out on the drive, Butt was impressed with what he saw and he is looking forward to guiding the juvenile trotter in the Bernie Stewart Memorial Trot (2600m).

“I was hoping to get a win with him on the first day, but I didn’t even make it because the road was closed, but that is just the way it is,” Butt said.

“It will be a bit harder on Tuesday, but he won well and he looks like a horse who could win a few races.

“I hope he does everything right and goes as well as the first day.”

Butt has saluted the judge more than 1100 times from the sulky but is less active in the cart these days, with Sunday’s drive set to be his eighth of the extended season.

He is looking forward to renewing his association with Nairn on Tuesday, with the partnership enjoying plenty of success on the track over the years.

“It should be good, I am really looking forward to it,” Butt said.

“It would have been seven or eight months since I last drove.

“There have been a lot of highlights with Paul. Call Me Now was a great horse early on, he won a Dominion and Inter Dominion, and Stig was a good one later on.

“They were the best two I have driven for him.”

Like many in the industry, Butt enjoys the West Coast circuit, treating it as a working holiday following the festivities of Christmas.

“We make it a bit of a holiday. I was hoping to drive a winner but we will have to wait and see,” he said.

Craig "The Whale" Thompson shares his thoughts on tonight's meeting at Cambridge.

Mangos re-unites with his stable star at Cambridge

Trainer Brent Mangos will have the rare thrill of taking his stable star South Coast Arden for a race night spin at Cambridge tonight and he looks to have found the perfect race for their reunion.