It was billed as one of the strongest trotting races in some time and the Group Three Canterbury Park Trotting Cup (2600m) certainly delivered at Addington Raceway on Friday night.

There was drama from the outset with second favourite Muscle Mountain missing away at the start, while Majestic Man was tardily away from his 20m back mark.

In stark comparison, race favourite Sundees Son made a flier from his 20m mark and driver John Dunn was able to find the back of Bolt For Brilliance and followed him into the race when driver Jim Curtin pressed his charge forward three-wide at the bell.

Sundees Son secured the parked position outside of stablemate Chief Of Staff who he was able to head down the home straight before holding out the late challenge of another stablemate in Mataderos to win by half a head, with Chief Of Staff running on to finish a further 1-1/4 lengths in third, securing the stable trifecta.

“It was a great field and it was a good race too,” said Robert Dunn, who trains the trio in partnership with his daughter-in-law Jenna Dunn.

“Johnny (Dunn) put Sundees Son in the race at the right time and he is such a great horse, he just knows where the winning post is. 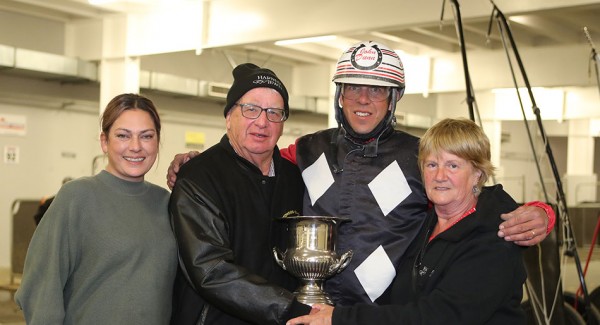 Dunn was just as rapt with the performances of Mataderos and Chief Of Staff.

“We were thrilled with both of them,” he said.

“Mataderos has only had a couple of starts in this grade and he is improving all the time. He is trotting away so nicely.

“His nemesis when we first got him was the all-weather track, he was nowhere near as good as he was on the grass tracks, but he has certainly improved really quickly, so that was pleasing.

“I thought Blair (Orange) drove him perfectly, his first drive on him in such a big race, in virtually a Dominion field. The way he found the line was super.

“Chief Of Staff just keeps on getting better all the time too.”

Touching on some of his key rivals, Dunn is looking forward to meeting them again as they head towards the Group One Dominion Trot (3200m) next month.

“Oscar Bonavena was great, Mark (Purdon, co-trainer and driver) will be pleased with him,” Dunn said. “Tony (Herlihy) will be rapt with his horse first-up, he hasn’t raced for a while, so it was a good run from Bolt For Brilliance.

“Greg’s (Hope) horse (Muscle Mountain) was unlucky at the start, as too was Majestic Man. One of them was a bit slow away and the other missed away, so that was a bit hard on them

“They will improve on that and we know they are great trotters and they will be different next time around.”

Looking towards their next targets, Dunn is in favour of returning to Addington for the Kaikoura meeting, a week out from the Dominion, with his team.

“With Mataderos and Sundees Son not wanting to go over the mile at Ashburton, they definitely won’t go there, they will be more inclined to head to Kaikoura at Addington,” he said.

Earlier in the night Dunn was pleased to see juvenile trotting filly One Thirtythree win on debut in the Avon City Ford 2YO Mobile Trot (1980m) after another gun drive by John Dunn.

“Johnny has won all four trots tonight which is not a bad effort, he is driving out of his skin,” Robert Dunn said.

“One Thirtythree was great, I was rapt with her.

“We had her up in Auckland and I decided at the start of lockdown to send the horses I had here all back to Christchurch, just the way the racing was, and we thought this lockdown was going to be longer than it was shorter, so I think I made the right call there.

“We have always liked her right from the time we got her as a late yearling. She showed promise as an early two-year-old, so it was great to see her do that tonight.”

And there was plenty of drama in the night’s feature pace as well with defending New Zealand Cup champion Self Assured beating South Coast Arden in the IRT. Your Horse. Our Passion Handicap at Addington.

South Coast Arden was first past the post, by a nose, but a protest was lodged with the connections of Self Assured claiming they’d been hampered in the home straight.

And the protest was upheld, with replays showing that South Coast Arden veered out as Self Assured was mounting his challenge.

South Coast Arden (Natalie Rasmussen) started as a $1.30 favourite in the 2600 metre feature, and he was parked outside Henry Hubert turning for home.

After the win Self Assured remains the favourite for the New Zealand Cup at Addington on Tuesday November 9, from South Coast Arden and Copy That.