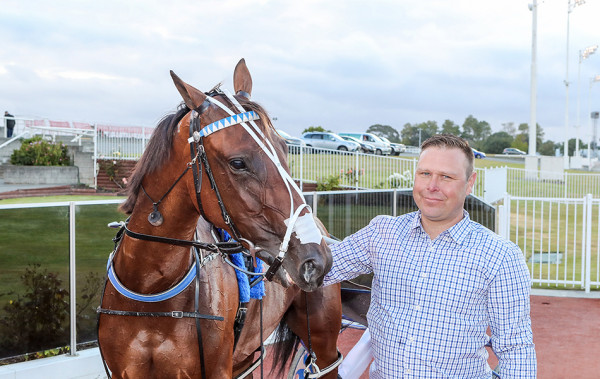 Hayden Cullen has been used to greeting Mark Purdon in Addington’s winner’s circle, but on Friday night it was a lot more sentimental.

Cullen inherited his former boss’s star-studded team at the start of the year when he and partner Natalie Rasmussen decided to take a hiatus from training the country’s most dominant stable.

It was Cullen’s fifth start in charge of the former All-Star barn and he was delighted to finally get the monkey off his back and record his first victory with Amazing Dream in the Gr.2 Garrards Premier Mares Championship Mobile Pace (1980m).

Amazing Dream was initially taken back to sit midfield from her wide barrier, before Purdon elected to remain three-wide and press forward for the lead.

She finally got to the front at the bell and Purdon continued to set a genuine pace. Need You Now was able to take advantage of the passing lane up the home straight, but came up just short, going down by a head to Amazing Dream, with a further five lengths back to Watch Me Now in third.

While Amazing Dream looked to tire in the closing stages, Cullen said she had every right to after doing a power of work throughout, and he was proud she was able to show her winning determination to hold on for a short-margin victory.

“She is a great mare and she always gives 110 percent,” Cullen said.

“I thought it was a great run considering she hasn’t raced in four weeks.

“She worked right from the start until the finish. She looks like she got a bit tired, but she was always a sitting duck out in front. Once they start coming at her she always finds another gear.

“I certainly think she will be better in two weeks’ time.”

Cullen admitted taking over such a dominant stable has been a daunting process, but he is delighted to finally be on the board and said a Group Two victory with Amazing Dream wasn’t a bad way to record his first training win in a solo capacity.

“It was a huge relief. She is last year’s Auckland Cup winner and there is a lot of pressure on for her perform,” he said.

“It is daunting (taking over the stable), but a huge privilege and honour at the same time.

“There are a lot of ready-made horses there and I am very lucky to be in that situation, but a lot of pressure comes with it also.”

Training is nothing new to Cullen, having previously trained in partnership with Brent Mangos for four seasons, but he said there has been a learning curve to operating on his own.

“I am finding my feet,” he said. “The biggest part is communication with the owners, that is probably the hardest part. It is something you have got to keep on top of.

“When I was with Brent it was fifty-fifty with the jobs we would do, but on my own it’s all on me.”

Friday’s win will live long in the memory of Cullen, who said it rates alongside victories by Bettor Cover Lover in the Gr.1 Queen Of Hearts (2200m), and his own horse, Tuhimata Glass in the Gr.1 Australasian Breeders Crown 2YO Trotters Final (2240m).

“Another one was Bettor Cover Lover. She got injured in Melbourne on the way home one year and she wasn’t even going to race again, so it was a huge effort to get her back to the track and it was a very special race when she came back and won the Queen Of Hearts.”

Things are starting to ramp up for Cullen now and he is looking forward to stepping out more of his team at the trials and races over the coming weeks, including Amazing Dream in the Gr.1 New Zealand Breeders’ Stakes (2600m) at Addington in a fortnight.

“Amazing Dream will race in the Breeders Stakes on February 12,” Cullen said.

“We will have about 10 at the trials next Wednesday and a couple of three-year-old trotters racing next Friday, so we are starting to fire up now.”