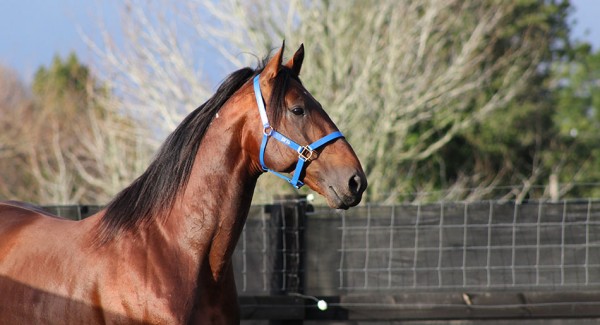 He was operated on days after arriving into quarantine, ahead of standing at Woodlands Stud for the upcoming breeding season in Australasia.

“The bout of colic happened late morning following his arrival to Auckland on Wednesday. He went to surgery shortly after an ultrasound scan confirmed a small intestinal blockage and one metre of bowel was removed,” said Andrew Grierson, co-owner of Woodlands Stud.

He is still expected to leave quarantine and arrive at Woodlands Stud to complete his breeding season here as scheduled on August 30th along with the other New Zealand based stallions Bettor’s Delight, Sweet Lou and What The Hill.

“He has recovered remarkably quickly and although it is early days all signs thus far are positive. He is on track to make a full recovery. Full credit to the team of veterinarians involved, where both the speed in diagnosis and the decision to operate has undeniably saved him,” said Grierson.

Downbytheseaside has already been a popular choice for New Zealand and Australian breeders with his Australian book already full at the limit of 150 and his New Zealand book is tracking well towards 150 also.

The USTA 2017 Pacer of the Year currently has his first crop racing in North America and he currently leads all pacing stallions for money-winning 2-year-olds on both total and average earnings – surpassing the likes of Captaintreacherous and Always B Miki.

With those results combined with the terrific reports from Australasian breakers and trainers of his progeny down under, Downbytheseaside stands as the most exciting freshman sire in the world.

Woodlands Stud ensures that breeders will be kept up to date with his recovery and how he is tracking in the breeding shed as we near the start of the 2021-22 breeding season. For any further queries about Downbytheseaside please contact:

The early signs are encouraging for one of the all-time greats of New Zealand racing who has returned home to try and save his Down Under breeding career.

So much can go into getting a horse to the races, and Friday's debutante Absolute Dynamite is a case in point.