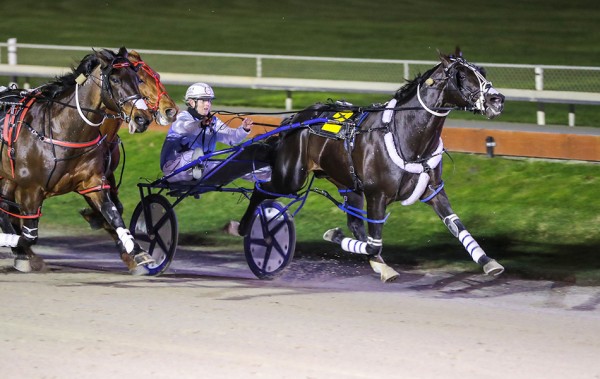 The Brian O’Meara-trained entire finished runner-up behind Classie Brigade in the race last year but he was able to turn the tables on his more fancied opponent in this year’s running.

The son of Shadow Play had a quiet run three back on the markers throughout the 2600m journey and driver Sam Ottley was able to weave her magic down the home straight to find a passage up the passing lane where Di Caprio got the better of his rivals to win by half a length.

O’Meara was pleased with the performance and said he received a glowing report from Ottley following the race.

“Sam said to me that he would have won very easily if he could have got clear sooner. Past the post he was away by a long way,” O’Meara said.

While Di Caprio put in a pleasing run to place in the Gr.3 Maurice Holmes Vase (2600m) at Addington last week, O’Meara had a feeling something wasn’t quite right with his charge, which was proven right upon a veterinary inspection.

“We knew that something wasn’t quite right, he was on one line quite bad,” O’Meara said.

“We checked him out and the vet found a corn, so we cut that out and hopefully he is fine now.

“I was very pleased with the way he worked during the week and I was quietly confident, but you don’t want to be too confident in this game.”

It’s not the first time Di Caprio has had issues with corns, having faced a similar scenario last year.

“He didn’t race for nine months because we had to get three corns looked at,” O’Meara said.

“We were on top of two of them but one of them has come back a bit, which we have taken care of again.”

Friday’s win was Di Caprio’s seventh, but uniquely his first on an all-weather surface, having won his previous six races on the grass.

“It seems a bit funny that tonight was his first win on the all-weather in the New Brighton Cup,” O’Meara said.

“I raced him on the grass because as a three-year-old he just felt like he had something not quite right with a hip in behind.

“I asked the breeder did he ever get caught up in the cattle yard or something like that, but he didn’t think he had.

“There was always something there early and then he came right on the grass. I remember one day at Motukarara that he was timed to run his last half in 55 on the grass, and not many do that.

“It was just a matter of slowly coming out of everything and now I think he is quite a smart horse.”

Friday’s win was also Di Caprio’s first at stakes level, and O’Meara has a stark warning for his rivals heading deeper into spring racing.

“I think he could get a wee bit better yet,” he said.

The Gr.1 New Zealand Trotting Cup (3200m) remains Di Caprio’s main target and O’Meara has pencilled in a path towards the two-mile feature.

“I will probably have a go at the Canterbury Classic coming up in about three weeks, and the Methven Cup,” he said.

“We will go from there and see what happens.”

Earlier on the card Sundees Son returned to his winning ways when taking out the Gr.3 Ordeal Trotting Cup (2600m), recording a 1-1/4 length victory over a game Majestic Lavros, with a further length back to an improving Midnight Dash in third.