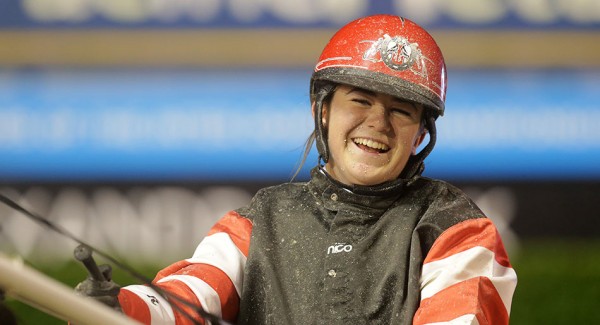 I See Fire may have missed out on an IRT Harness Jewels start but he suggested there could be more group ones coming up later in his career when winning at Alexandra Park on Friday night.

The three-year-old was just one of the highlights of a special night at The Park to start Jewels weekend, with Credit Master back in the winner’s circle earlier and young reinswoman, or should that be reinsgirl, Crystal Hackett recording her first career driving success in the last race.

But the most impressive victor was I See Fire, who only missed out on qualifying for the Jewels by $400 and even only because he galloped in his last three starts.

He trotted squarely enough on Friday but hung terribly, not filling punters with confidence for much of the trip, but when trainer-driver Tony Herlihy let him go he bolted clear before the top of the straight to win by eight lengths.

More importantly he broke 3:30 for 2700m standing start and over a long period of time horses capable of doing that have tended to go on to open class if they can do it regularly.

You get the feeling I See Fire could have gone two or three seconds quicker so he has an open class motor for sure.

“He has always shown a lot of promise but he had just been getting a few things wrong,” said Herlihy.

“But when he settles down and starts to know what is going on he has a very promising future.”

So too does the Herlihy trained and driven Last Tango In Heaven, who overcame an early skip in his first standing start to win the night’s main pace from a charging Folklore, who looked unlucky not to make it two Alexandra Park wins in a week.

The main trot was taken out by Credit Master for catch driver Nathan Williamson, who was recording only his fifth Alexandra Park driving win.

He won on Kiwitrix, who he trains, last week but before then hadn’t won a race at The Park since 2016 and that followed another five years gap after winning two in 2011.

Credit Master himself hadn’t won a race since October last year but looks well placed in the winter trots as long as he doesn’t get too harshly handicapped.

But it was the ladies who captured the two most popular wins of the night.

Kimberley Blakemore produced a perfect drive on The Blue Beat for her fifth career driving success and a change of role as she is usually the one welcoming winning horses back to the presentation area at Alexandra Park as the official attendant for winning photos.

And maybe the result of the night was saved to last when Crystal Hackett, daughter of trainers Bernie Hackett and Michelle Wallis, reined her parent’s horse High In The Sky to win the last race.

Her first win came at only her seventh drive but she is already an accomplished horseperson with an outstanding record for one so young in the showjumping arena.