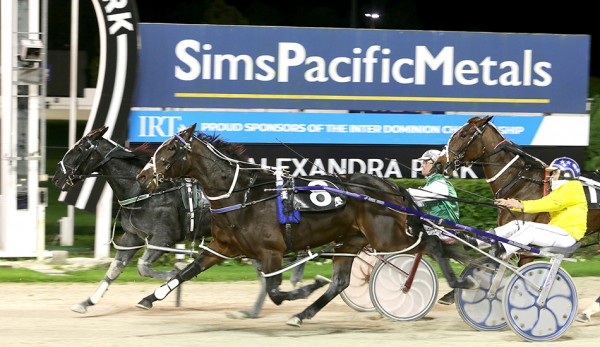 Winning a stakes race isn’t a bad way to record your maiden victory, and that is exactly what Cover Girl did at Alexandra Park on Thursday night.

The Bob Butt-trained filly has shown plenty of promise and was backed into favouritism in the Gr.1 Caduceus Club Fillies Classic (2200m) at just her second start last month, but True Fantasy proved too classy on that occasion.

However, Cover Girl was able to turn the tables on the Hayden Cullen-trained filly on Thursday when pipping her at the post in the Listed NZB Standardbred Harness Million 2 Final Mobile Pace (1700m).

Butt was able to find an early trail behind Dance Till Dawn, which she was able to utilise throughout, while True Fantasy was forced to sit outside the leader. True Fantasy entered the straight with a length advantage over Cover Girl, but the latter was able to use the passing lane and wear down the Harness Jewels leader to win by a half neck.

Butt was duly pleased with the result and said it was a good reward after a few luckless runs in her previous two starts at Auckland.

“It’s a really good race to win, she went really well,” Butt said. “We got the luck and the perfect run.

“She wasn’t going that bad in those lead-up races. Her form didn’t read that well, but she was doing a bit of work and things didn’t work out and tonight they did.”

Cover Girl was purchased out of Breckon Farms’ 2020 NZB Standardbred National Yearling Sale for $95,000 and Butt was delighted her owners were rewarded for their investment on Thursday night.

“They are a great bunch of owners, so it is great for them,” he said. “They put a lot of money in and now they have got some back.”

Cover Girl will now return to Canterbury where she will spell ahead of her Classic season.

“She has had a big trip away and a few runs, so she can have a good spell now,” Butt said. “She has done a great job and hopefully she can improve next year.”

Meanwhile, Time Up The Hill justified her short-priced favouritism when running away to a comfortable 1-1/4 length victory in the Gr.3 Haras des Trotteurs Northern Trotting Oaks (2200m).

It was just reward, having run Five Wise Men so close in the Gr.1 Northern Trotting Derby (2700m) last week.

The daughter of Muscle Hill will remain north to continue her rivalry with Five Wise Men in next month’s Harness Jewels at Cambridge Raceway.