Clinical win by Copy That 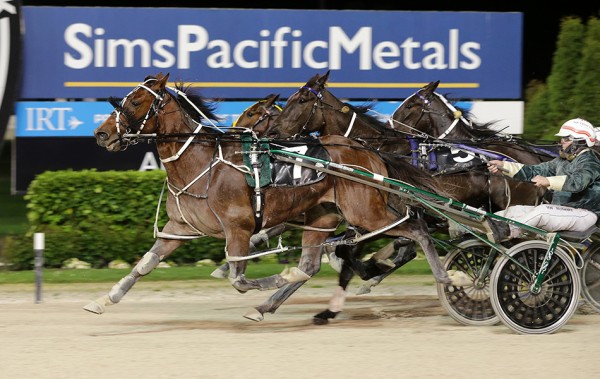 Copy That made the perfect start to his Gr.1 New Zealand Trotting Cup (3200m) preparation when taking out the Alabar 2021 Spring Cup (2200m) at Alexandra Park on Friday night.

The Ray Green-trained entire began well from the frontline and driver Maurice McKendry was able to find an early one-one position where they were able to remain throughout.

McKendry peeled the $1.50 favourite three-wide turning for home where he was able to run away to a three-quarter of a length victory over Bad To The Bone, with a further short head back to Christanshavtime in third.

Green was pleased with Copy That’s first-up performance and said it lays a solid foundation for his campaign towards the New Zealand Trotting Cup next month.

“It was clinical and a tradesman-like win,” he said.

“It was nothing spectacular, but he got a good trip and stepped well, pounced on the lead pretty quickly and did what he had to up the straight.

“They only went slow tonight for that class of horse, but I was pleased with how he pulled up.”

“He is a horse who prefers to be in work, he likes a routine I think. He has bounced back pretty good,” Green said.

Copy That will have one more northern start in the Holmes DG (2700m) at Alexandra Park in a fortnight before heading south ahead of the New Zealand Trotting Cup.

Meanwhile, Green said stablemate Arden’s Horizon is fine after being involved in a fall in the Vincent At Alabar/Nevele R 2YO Mobile Pace.

“He wasn’t hurt at all,” Green said. “It looked pretty nasty but he has come out of it okay.

“Even the sulky stood up to it pretty good, a shaft was just bent a little bit but nothing bad.”

Later on the card, the Michelle Wallis and Bernie Hackett-trained Temporale continued his picket fence form line when taking out the Majestic Son ‘NZ’s Champion Trot Sire’ Handicap Trot (2700m) by 2-1/4 lengths over Kings Landing, with Invictus sealing a stable trifecta when running a head away in third.