Change of scene for two of racing's warhorses 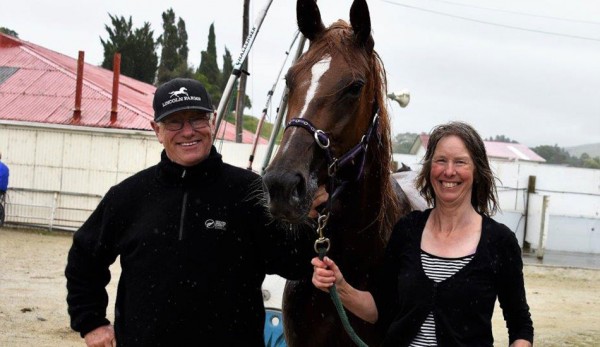 Sounding like a pop group out of the 1960s, Bruce and the Battlers are heading to Timaru on Sunday.

Veteran trainer Bruce Negus - known as the Burnham Battler during his association with Courage Under Fire in the late 1990s-2000s - is now training two battlers himself in Alexy and Four Starzzz Shiraz.

They have been transferred from regular trainer (and brother-in-law) Denis O'Connell at Waikouaiti,  just north of Dunedin.

"Denis has broken a bone in his elbow," says Negus, "so he's not allowed to drive at all for six weeks."

"They've both got a spring in their step," says Negus of the two newcomers to his stable, "they have won a lot of races and they're probably win some more. They love racing."

Coincidentally Alexy, the country's most experienced horse with 334 starts and 11 wins, is by Courage Under Fire out of Alegria. He's raced every year for a decade  while Four Starzzz Shiraz has had 229 starts since 2014 for 20 wins. He's been trained by O'Connell since June 2019.

This is the first time Negus has officially trained Four Starzzz Shiraz though he has had a few stints with Alexy between 2013 -2016.

Earlier this month it was another Negus horse Shards Fury and driver Alan Edge that won the amateur drivers race at Addington.

"He's a one-paced stayer," says Negus, "and a bit of a cunning bludger."

Negus has 12 wins in 2022 so far with the latest being Classie Linc who went from near last to first in an impresssive performance at Rangiora last Sunday.

"I think she's the best filly I've had," says Negus, "she's an Oaks filly in the making."

Meantime four-win mare Katherine isn't far away from a return to the races and fellow four-year-old Corrovally Star (6 wins-39 starts) is back in work.

"He's a lovely sound horse and a lot of the Washington VCs keep improving till they are 5 and 6."

"I am not saying he'll win the New Zealand Cup but he could make the field."

With 15 currently in work Negus has a got a bit of everything - some promising types, a potential runner in the biggest race of them all and two old-stagers who between them will have their 565th start on Sunday.