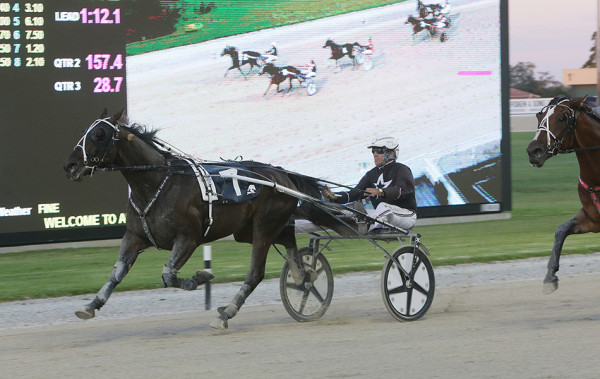 The Cambridge club may have been one of the big winner from a race run at Alexandra Park on Friday night.

Because after Bolt For Brilliance returned to the winner’s circle for the first time in four months on Friday night trainer-driver Tony Herlihy confirmed he will extend his campaign all the way to the Jewels in June.

And that sets up a potential superstar young trotters clash on the Cambridge day between Bolt For Brilliance, Cracker Hill, Ultimate Stride, Muscle Mountain and Midnight Dash.

The big four of that quartet are all, at this stage, being set for the Jewels after the mega day had to be postponed for a year last season because of Covid.

Now it could have a trotting race to rival anything the pacers can produce that day.

Bolt For Brilliance was a bit too sharp for Cracker Hill in their October clashes at Alexandra Park but the latter’s trainer Brad Williamson is adamant he will be better left-handed so the potential clash of the young trotters could set the tone for many of next season’s battles.

Bolt For Brilliance was backed as unbeatable even off a 45m handicap in the main trot on Friday and unlike his last-start defeat he was able to latch on to the body of the field far easier.

He worked around to pressure the leader at the 600m and won well from a brave Temporale with the overall time about 5 seconds shy of what the winner is capable of.

“He was better for that fresh up run and he can go to the races at the Derby meeting now,” said Herlihy.

After that he has a huge end to the season with the Anzac and Rowe Cups before the Jewels.

Bolt For Brilliance provided Herlihy with a rare training treble in running races on Friday, having prepared Mailman and Cowboys N Bandits to win the previous two pacing races.

Later in the night the two-year-old capped their preparations for their Young Gun Finals on March 5 and that saw a double to the Barry Purdon and Scott Phelan stable.

Artisan suggested she is the best and most professional of the fillies when she won their heat and she goes into the final with two wins and a brave second so only a poor draw will stop her starting favourite.

“She is a lovely filly and is sister to Major Trojan who won the WA Derby so a group win in a few weeks would be great for her,” said Purdon.

In the boys heat Montana D signalled his arrival on the juvenile boys scene with a huge late run to catch a very gallant leader in Classy Operator.

Montana D J, a son of Captaintreacherous and former superstar filly One Dream, cost $170,000 at the sales last year for Queensland owner Dean Shannon and even after two starts he looks worth every cent and more.