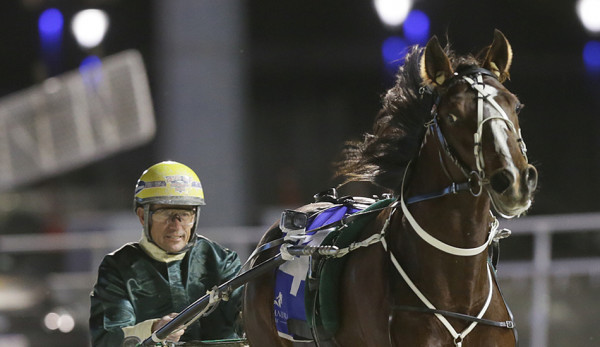 While punters might have struggled to believe American Dealer beat both Krug and It’s All About Faith in the first group one of the season at Alexandra Park last night, the really unbelievable story of the race was the driver.

Because quite incredibly American Dealer’s win in the $140,000 Sires’ Stakes Final was David Butcher’s first group one driving success in New Zealand in nine years.

Let that sink in.

Butcher, one of the greats of the sulky, a member of the elite 2000 win club and on anybody’s list for being in top five reinspeople in the country, hadn’t won a group one here since Cowgirls N Indians in the Harness Jewels in June 2011.

He had won one in the meantime in Australia, reigning King Of Swing to win a Breeders Crown in 2017 for American Dealer’s trainer Ray Green, who deserves most of the credit for Friday’s win.

But to think Butcher hasn’t been in the group one winners circle in this country in almost a decade is truly remarkable.

Butcher didn’t actually know that exact stat when reflecting after the race, but he knew it had been a while.

“I reckon the last time I was driving group one winners back here was when Geoffrey (Small, trainer) was flying,” said Butcher.

“So it is nice to get this one and behind a horse who tries so hard. He is a really good little professional,” says Butcher.

That fact it had been so long between drinks for Butcher shows just how hard winning group ones is in New Zealand these days, with a reduced number of dominant stables, while Butcher has also had to battle back from a couple of serious injuries.

“The body is good now, I am just getting old,” he laughs.

His courage under fire early helped win the 1700m event as many would have been tempted to hand the lead to hot favourite Krug, especially when It’s All About Faith came charging mid race and the pressure really went on.

But Butcher suits driving for Green because the Lincolns Farms team are never scared to be aggressive and roll the dice and this time it worked.

Recently sold to US owners Marc Hanover and Gordon Banks, American Dealer has just kept improving and after this week’s Harness Millions will chase a unique Sires’ Stakes double inside two months by contesting the three-year-old series against basically the same horses.

“I am very proud of him,” says Green.

“He is a real little racehorse and he has a big season ahead of him.”

While the draw may have won American Dealer the race his improvement curve and courage still suggest he is a Derby horse but whether he ever makes it to Australia this season will be interesting with Covid restrictions making hit and run missions on the Derbys there so much less palatable.

While disappointed at being beaten driver Blair Orange was proud of Krug, who had to work hard enough early and then came three wide that he probably lost a winning advantage but he still had his chance to beat the leader.

Its All About Faith was brave from the second line and can win the Millions with a draw to lead while the big improver in the race was B D Joe, who showed good gate speed to trail and stuck on well for fourth.

Later in the night Bolt For Brilliance sent out out a reminder to southern stars Cracker Hill and Ultimate Stride that he will take a power of beating in next month’s delayed three-year-old trots at Alexandra Park.

He recovered from getting into a horror spot with a lap to go to win the main trot with a 56.4 second last 800m three and four wide on the track, setting up some stunning age group races for the trotters next month.

And Brent Mangos pulled off the training performance of the night in The Box Seat Returns Pace when South Coast Arden led throughout to beat Auckland Cup placegetter Triple Eight in the winner’s first start since March.

He looks a bigger and stronger horse than last campaign and an open class horse in the making.