Bublitz doubles up after first win

After travelling a long road to the winner’s circle, junior driver Kaleb Bublitz made the day he scored his first driving victory one to remember at Ascot Park on Thursday.

After gaining his licence more than two years ago and racking up 17 placings, the North Island born and bred reinsman notched his first victory when rating the Phil Williamson trained Our Pinocchio to perfection in the lead.

Bublitz admitted he couldn’t keep the smile off his face when he coasted up the straight to secure his first driving victory.

“I think it has taken 95 drives, but it felt good crossing that line.”

“I was thinking you beauty, finally.”

After getting off the mark, Bublitz wasted no time before racking up his next win. 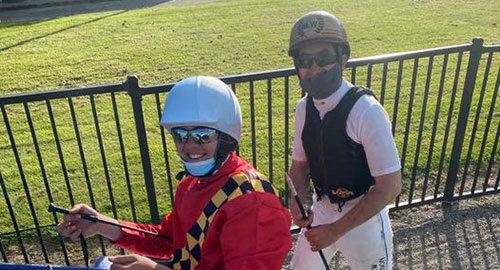 Just a matter of minutes later and in his next drive, the junior reinsman notched win number two with a heady front-running drive behind the Matthew Williamson trained Von Art.

Von Art was well backed by punters and expected to run well, but Bublitz admitted he did not expect her to race so well that she would hand him win number two.

“It was fantastic, she’s gone super that wee mare.”

“She travelled way better than I thought she was going to travel.”

“She was on the job the whole way.”

“We got eyeballed down the back a wee bit and she found enough.”

“Down the straight she kept kicking.”

The reinsman’s road to the winner’s circle started in Waikato and has come via Oamaru before finally ending at Ascot Park.

Bublitz took a chance by moving south to work for trotting master Phil Williamson and it clearly paid off yesterday.

“It was a big call, it is a long way from any friends and family that I have got up north.”

“I thought it was the right call because Phil Williamson is a very good trotting man, trainer and a good man full stop.”

“I can’t thank Phil and Bev (Williamson) enough for all of their support and for putting me on (horses).”

If Bublitz was looking for inspiration before his big day out he only had to watch Matthew Williamson’s drive in race 2.

The reinsman expertly extricated Duke Of Wellington from the inner after starting from barrier 1 on the second row in race 2.

After taking the pacer to the front with 1200m to run, the Lauren Pearson trained two-year-old left his rivals in his wake as he ran an impressive maiden victory.