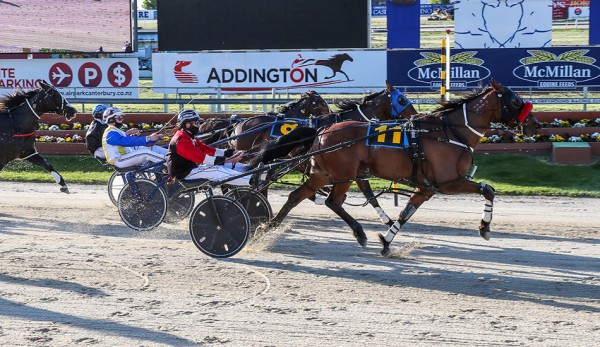 Junior driver Sam Thornley continued his great recent form when Boom lived up to his name at Addington on Thursday night.

Thornley presented the Sam Smolenski trained pacer in the home straight and he went boom, powering to the line to win race 4.

The victory took Thornley to 13 career wins and within two victories of a milestone he is determined to reach.

“I am just hoping to get to 15 wins so I can drive Royal Del in a few of the group races next season,” Thornley said.

Rated third favourite, there was confidence the Sam Smolenski trained Boom could help Thornley on his 15-win mission.

“Sam was pretty confident, he said he had been working well.”

“He just needed a bit of luck from the draw and it all worked out.”

“He did it pretty easy.”

Thornley got to 12 career wins at Oamaru last Sunday when producing a confident drive behind Corravally Star.

The reinsman found a handy spot for the Bruce Negus trained pacer early from barrier 9 in a 2000m race and once close enough, the pacer showed his class.

“He was just a class above them, Bruce had him ready to go, so it was good.”

“It was great to get the drive – for Bruce to put me on – so I was really happy.”

Thornley has formed a good association with Negus, driving his horses in junior driver’s races over a period of months.

Loyalty on both sides is paying off for the pair.

“I just drive all Bruce’s in the junior races, it just came about.”

“I mainly drive all Bruce’s even if I get offered others because in the end it works out.”

“Bruce has quite a nice team coming through.”

‘He’s nice to drive for, that’s the main thing, even if you do a few things wrong he is always pretty good.”

Negus said there was a lot more to Thornley’s commitment to driving Corravally Star than him simply turning up to jump in the bike behind his smart three-year-old.

“I cracked a few ribs, so Sam drove the truck down to Oamaru with Colleen (Negus) and then waited around all day for the last race,” the trainer said.

Negus also got in on the winning action at Addington when producing Senorita Margarita to win race 1.

The mare has been in the form of her life recently, which has come after she failed to get in foal last year.

“We only served her once but the semen was no good and I think she has won three races since then,” Negus said.

“I think she can win a couple more because she stays in that grade and she can win a junior driver’s race penalty free after January 1.”

“She is a lovely, well bred mare and we like her.”

Senorita Margarita was driven to win by her part-owner, Jo-ann Buckland-Stevens.