Bolt wins against the odds 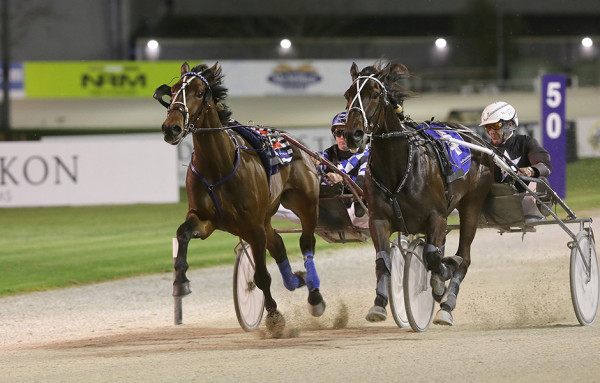 Just metres into the Sires’ Stakes Trot Championships on Friday driver Tony Herlihy looked down and knew he was in trouble.

The tyre on the inside sulky wheel behind his exceptional trotter Bolt For Brilliance was going flat.
“I couldn’t believe, it started straight after the start and I thought, well this is about the only way he could get beat,” lamented Herlihy.

But 2000m later concern turned into joyous disbelief as Bolt For Brilliance was still able to wear down a truly talented rival in Cracker Hill, trotting his last 800m in 54.6 for one of the more remarkable trotting wins seen at The Park in recent years.

That Bolt For Brilliance could trot that sort of time to win proves he is a top class horse who should win an open class group one.

But the fact he could do with the inner tube coming out of the tire and then seizing up the wheels, more seriously from the 800m mark, was the performance of a special horse.

“I don’t think I have ever had that happen and still win before,” said Herlihy, our most successful ever driver.

“Nothing happened to him at the start, it just started going down and I thought we were in trouble.

“We were a bit lucky that it didn’t really come off the rim and wedge into the sulky frame until the 800m but when they are trotting that sort of time it is incredible to think he could still win.”

It simply confirmed what two recent national records have suggested, that Bolt For Brilliance is not only the best of this four-year-old crop but potentially one day the best trotter in Australasia.

He will now go for a spell, missing Cup week, and be aimed at the National Trot at Alexandra Park on New Years Eve.

He was the King of the Park on a night when the young fillies provided the other highlights.

Shes No Lady won the final heat of the delayed juvenile fillies Sires’ Stakes, using her gate speed to lead and hold a brave Bettor Twist at bay.

“I know the draw helped but Zac (Butcher, driver) came back and said she felt like a good horse tonight,” said co-trainer Steven Reid.

“And that gives us confidence heading into the final and what could be a long season ahead for these fillies.” Darling Me was allowed to bypass the heat to race in a grade race and she was brilliant pacing her last 400m in 26.5 seconds to beat former stablemate Nevada.

“Bettor Twist might be tougher and Darling Me have more high speed.”

Later in the night South Coast Arden overcame a tricky trip to stamp himself as an open class horse by downing Star Galleria and On The Cards in the 2200m mobile.

He was crossed out of the gate, not because of lack of gate speed but because he got too keen, forcing Brent Mangos to take hold of him.

That saw him settle three back on the inner and there was some hairy moments for those who backed him into favouritism but he muscled his way into the clear at the 400m and was simply too good for the more established stars.

Mangos had toyed with the idea of making a late payment to get South Coast Arden into the New Zealand Cup but with the four-year-old only really looking up to this grade in the last two weeks the final late payment is now prohibitive.

“So he will probably stay up here where he is racing so well,” said Mangos.