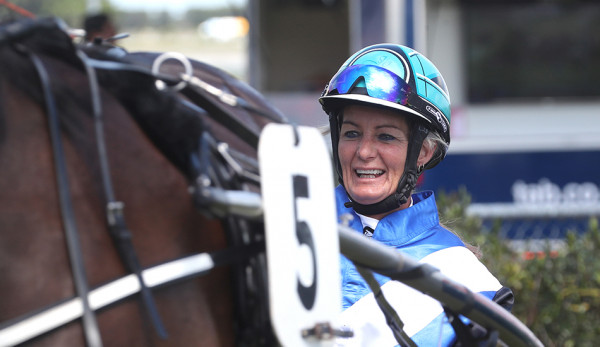 It’s been more than a decade since Jo Herbert saluted the judge, but her winning drive behind Blue Chip Delight at Motukarara Raceway on Sunday showed she hasn’t lost any of her talent.

Blue Chip Delight made a solid start to sit midfield before Herbert asked him to improve three-wide down the back straight to sit outside leader Eastwood Isabella.

They hit the lead at the top of the straight and didn’t relinquish their advantage, holding out the fast-finishing The Kaik to win by a neck, with a further head back to Bettor Believe It in third.

Herbert was delighted to get the win after such a long hiatus.

“It felt really good, it’s been a long time between drinks,” she said. “I was pleased with the horse, he went well.”

A pioneer for female drivers in New Zealand, Herbert won 193 races in the cart before she was forced to step away from the game 10 years ago to look after her son Brooklyn.

“At the time it was in the too hard basket, he wasn’t that well,” Herbert said. “It got too hard, so I just focused on him. He is 13 now so he is quite good at self-managing.”

Herbert returned to the industry last year after the urgings of trainer Stephen Boyd and she landed her ideal job with current employers Colin and Julie DeFilippi, for whom she drove Blue Chip Delight on Sunday, earlier this year.

“I was initially influenced by Stephen Boyd in getting me out there, that definitely helped,” Herbert said.

“I now work for Colin and Julie, you couldn’t ask for nicer people.

“When I was pregnant he ended up training my trotter. I kept working him right up until I was 30 weeks pregnant and then sent him to Colin. He has always been like my father in harness racing.”

When Herbert heard the DeFilippi’s were looking for another worker, she said she was quick to get on the phone, even though she was on the other side of the world at the time.

“When I heard he was looking for someone I was straight on the phone from Spain. We went over there for five weeks back in February,” she said.

“We were quite lucky because two days after we got home Barcelona was in lockdown. We timed perfectly.”

Herbert’s win on Sunday has brought her just six wins shy of 200 driving career wins, a mark she would have tried to attain 10 years ago had she known she was so close.

“At the time when I stopped I hadn’t actually looked at that (career win tally),” Herbert said. “It was more that I had to do it (give up driving) because of my son.

“If I had known back then that I was that close I wouldn’t have given it up quite so soon.”

Herbert said DeFilippi has been trying to get her back in the cart for some time, but she has been happy working behind the scenes.

“He has been trying to, but I have been quite happy just gearing up, it hasn’t fazed me,” she said.

But with three horses in the field of the Country Feasts Pace (2170m) on Sunday, DeFilippi was able to twist Herbert’s arm into taking the drive behind Blue Chip Delight, and they were both rewarded.

“It was great to get the win today, but I am just happy to be working for him,” Herbert said.

North Canterbury trainer Regan Todd isn’t one to get too carried away but he concedes that Shut Up N Dance is “pretty exciting”.

Job done for Williamsons across the ditch