Big win on "debut" for Piece Of Gold

Canterbury trainer Megan McIntyre had modest expectations for her only starter at yesterday's Methven meeting.

She had only had Piece Of Gold for two weeks.

"I just wanted him to step and hit the line and get confidence." 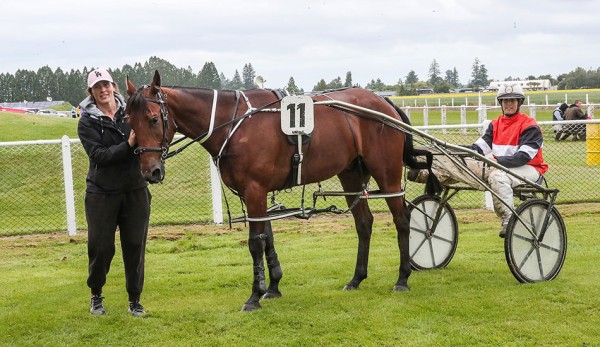 Instead the Gold Ace three-year-old led from start to finish for driver Sam Ottley in the Darfield Hotel/JFK Homes Ltd Pace, clearing out by seven lengths for the most clear-cut victory of the day.

It was an easy watch in the end though McIntyre thought for a moment or two that her good mate Ottley may have gone a bit soon.

"At the 500 when they were three lengths clear I was like - hang on a minute."

It was Piece Of Gold's first win in 19 starts and the gelding's first start for McIntyre after she acquired him from Ken Dixon. Ken's son Mike Dixon and McIntyre's partner Stephen Swain have only recently taken over the horse - "they know each other through the Waihora rugby club."

She picked up the horse a fortnight ago today.

"Since I got him he's had his teeth done and been to the chiropractor and he just seemed really happy in himself, and bouncing around the paddock." 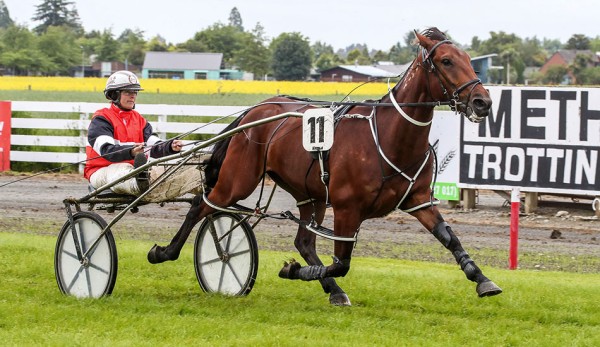 Before yesterday his best performances had been two fourths at Addington.

"He's probably more suited to the grass and the country meetings," says McIntyre, "so we'll stick to that, and the stands."

His next start will be on the grass at Rangiora this Sunday.

McIntyre's been training since 2019 with four wins so far. Her other race winners have been Major Collect and Go Kiwi (twice) - "we never saw his full potential".

She trains four horses on a 25 acre (10 hectare) property at Dunsandel, a half hour drive from Christchurch, and also works for fellow trainer Michael House in the mornings.

Ideally she'd like to have up to a dozen horses in work and has been heartened by Piece Of Gold's "debut".

"It's great to change a horse's form around, it's always good for potential owners."