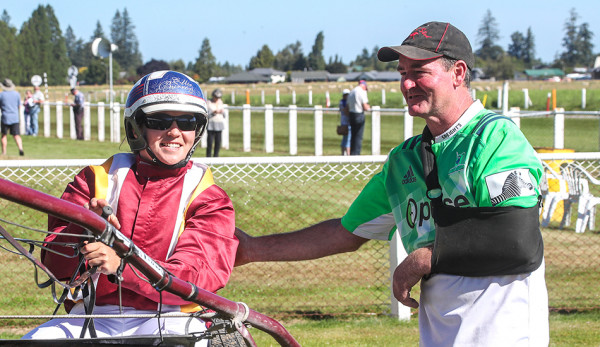 Grass track specialist Hurricane Banner provided a birthday victory and a timely boost with his win at Methven on Sunday.

Driver Ellie Barron celebrated her 26th birthday in style when the eight-year-old ran to his eighth career win in race 12.

The victory provided a timely boost for Southland couple, trainer Shane Matheson and partner Lisa Barrie, after they walked away from a potentially fatal road accident recently.

Barron was delighted to be able to land a winner for the pair in what has been a trying time for them.

“100%, Shane is walking around with his arm in a sling, it was really good to win for him and Lisa.”

“They have always been really good supporters of mine.”

“Nine times out of ten I am second in line to Sheree (Tomlinson), which is really nice.”

“I get to drive this horse all the time, ever since he won the Tin Shed Cup at Balfour.”

“So, I have been pretty lucky to drive a genuine horse like him.”

To have their horses in such good form is remarkable given what Matheson and Barrie have been through following their accident.

Hit t-bone style at approximately 100km/h, their ute was sent hurtling across the road.

Matheson and Barrie were left both shaken and with serious bumps and bruises.

“He would have hit us at about 100km/h and it wasn’t just that we were hit,” Matheson said.

“We were hit, spun and then rolled into a paddock – we rolled five times.”

Matheson has been left with a severe arm injury which will require surgery.

The operation needs to be successful so that the trainer can not only get back to full strength to train his horses, but it is also essential for his livelihood – his busy Northern Southland crutching business.

“It was a nasty accident and we are happy to have walked away,” Matheson said.

“But there are a few things to deal with afterwards.”

“They are going to operate on my arm next week and it is pretty bad.”

“They can have one go at it and if it doesn’t work I won’t be able to lift my arm, so it is quite serious.”

“It has got to stay still for three months if it moves it will tear and it will be no good.”

With Matheson unable to work his team his stable has been kept going by the help of fellow trainers headed by Kirsty Adams.

Matheson and Barrie have been left humbled by the support of the harness racing fraternity and the Northern Southland community.

“We have been very humbled,” Matheson said.

“Everyone has been really great, it is hard to put into words.”

Matheson and Barrie plan to cut down their horse numbers to a bare minimum while Matheson recovers from his upcoming surgery.

The inaugural running of the Little Green Jug at Methven on Sunday provided an exciting finish which ended in a tough victory for Got You Covered.

The Robert Dunn trained three-year-old sat parked for the second half of the mile (1609m) feature and dug deep to hold off placegetters Boora and Corravally Star in the straight.

Got You Covered is proving to a star in feature grass track races, his victory on Sunday followed his dead-heat win with Gilligan’s Island in last month's Christmas Cup at Motukarara.