Tough night for Kiwis at Cranbourne 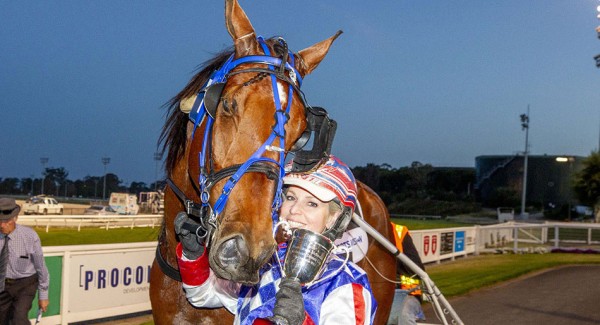 A talented former Kiwi won the Group 3 Cranbourne Trotters’ Cup, but not the one punters wanted or most expected.

Majestic Man, on the quick back-up after his Inter Dominion second placing, enjoyed a good trip, copped a bump on the home bend, but raced well below his best when he just battled into fourth spot.

It was Andy and Kate Gath’s Havehorsewilltravel who blasted across from outside draw to lead, dictated terms and ripped home in 56.9sec to beat Hatchback in a cosy 2min2.7sec mile rate for the long 2555m mobile trip.

In the Pacing Cup, NZ Cup winner Copy That ran the worst race of his career and dropped out to finish a distant last.

While champion mare Amazing Dream led and ran second, but appeared to have every chance after driver Anthony Butt dictated terms through a slow middle half.

We will forever wonder what might have been with former superstar Kiwi pacer Turn It Up.

Now it’s just a matter of making the best of his injury-ravaged body for Vicki Rasmussen and Shane Graham.

Hence the satisfaction of winning last night’s Christmas Cup with Turn It Up would have been enormous.

The rising seven-year-old used his blazing gate speed to lead, Graham “pinched” a 31.6sec second split of the last mile and Turn It Up left his rivals gasping at the end of the 2680m trip with a 26.1sec closing quarter to win by six metres.

The Fremantle and WA Cups are just weeks away and shaping as epic races.

There’s no doubt WA boasts the strongest open-class depth of any jurisdiction in Australasia.

While Wildwest took the points and earned it with a slick 1min52.8sec all-the-way win, the runs of Minstrel, Magnificent Storm and Chicago Bull were all outstanding.

The race left us wanting more.

And you’ve still got the likes of Hurricane Harley and Mighty Conqueror to throw into the mix of next month’s big Cups’ double.

Wildwest easily led from the pole for driver Callan Suvaljko, who was content to let him roll through splits of 28.6 and 29.2sec in the middle half.

He then ripped down the back in 27.5sec before closing off in 28.1sec to beat improving stablemate Diego, who flew late from a soft trail, by a half neck.

Minstrel’s run to sit parked and do all the work over a sprint trip when he is more a stayer was terrific. He finished two just metres away in third spot.

Chicago Bull, who was returning from a lengthy break, and Magnificent Storm settled at the rear from their wide draws.

They simply couldn’t get into the race, both smashed the clock late storming home out wide to finish fourth and fifth respectively. They were both just three metres from the winner.

Magnificent Storm’s own closing splits – out four and five-wide – were 54.7 and 27sec flat.

Importantly, WA has pushed back its major races slightly.

The other highlights of last Friday’s Gloucester Park meeting were the continued rise of young gun driver Emily Suvaljko and another feature win for exciting former Kiwi pacer Jumpingjackmac.

Suvaljko is quickly establishing herself as one of the best young drivers in Australia and underlined it with four wins last Friday.

Jumpingjackmac led home a Gary Hall Sr trifecta in the $50,000 Group 2 Christmas Gift (2130m) when he worked around to take the lead and just held-off exciting stablemates The Ideal Touch and Finvarra in a 1min56.7sec mile rate.

While Jumpingjackmac got the prize, it’s hard not to argue The Ideal Touch and Finvarra went at least as well, if not better.

In a minor upset, driver Isobel Ross found the front from gate two on the Turnbull-trained mare and always looked in control, going on to win by 5.4m in a 1min58.5sec mile rate over her stablemate Fasika (driven by Turnbull).

In the other feature, the Inter Dominion formline proved too strong when Chris Frisby’s Alphorism stormed to an impressive win over comeback stayer Atomic Red in the Quamby Stayers Cup (2525m).

It was a huge drop in class for Alphorism who finished 11th, seventh and eighth in his three Inter Dominion heats.

Atomic Red also contested the Inter Dominion, running last in his first two heats before being pulled out of the series.

Mach Dan, who just missed making the final and was beaten a whisker in the consolation, buzzed to the lead and sparkled in a 1min50.3sec mile at his first post-series start for trainer Kevin Pizzuto at Menangle last night.

Another notable winner on the night was former handy Victorian pacer Somebeachshadow at his first run for Inter Dominion winning trainer Jason Grimson. He led throughout in a 1min51.4sec mile and should be a handy addition to the stable.