Another cup for Gilligans Island 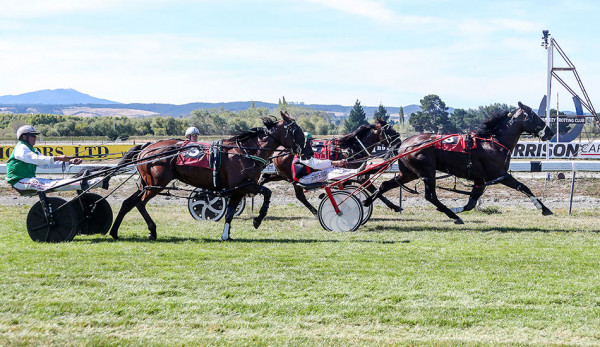 Gilligans Island added the Amberley Cup to his country cups haul with another strong grass track performance at Rangiora on Monday.

The four-year-old came into the 2600m feature with an Akaroa Cup win and a dead-heat victory in the Motukarara Christmas Cup to his name.

Following his placings in the Marlborough Cup and Cup prelude, the four-year-old delivered yet another impressive grass track performance by winning the Amberley Cup.

After making steady progress in his career up until now, Gilligans Island has taken his game to a new level over summer, trainer Graham Court said.

“He has really jumped out of the ground in the last few weeks.”

“He has really turned the corner, big time.”

The Court stable have plenty of options ahead for Gilligans Island.

With such hot grass track form, the pacer will continue his run at Canterbury country cups rather than head to the upcoming premier meetings at Addington.

“He has got a couple of country cups to come yet before he gets into the premier stuff,” Court said.

“He went to the premier meeting last week, but he was in front and he is not a leader.”

“That is not really his best shot.”

McDonald has had Total Diva and Mach Da Vinci in the Canterbury barn, both have now moved on to race successfully in New South Wales.

“It is great for the owner, it is a great guy that owns him, we sold him Mach Da Vinci and he has got Total Diva.”

“It is the nicest bunch of horses he has ever had.”

After settling in midfield, Orange took the four-year-old to the lead in the middle stages before he ran to victory.

As well as preparing his race team, the Court stable is also focusing on readying six two-year-olds for the races.

Lot 209, A Rocknroll Heaven colt from RR Sand Dollar will be sold in Christchurch.

“He is a lovely black colt, he will develop into something, that’s for sure.”