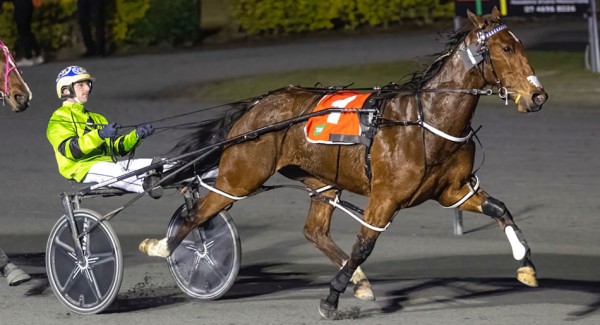 The Nathan Purdon-trained filly had a new driver with NSW young gun Cam Hart “subbing-in” for Chris Alford and it was a cosy gig with Amore Vita using barrier one to lead, dictate terms and win as she liked in the Group 3 Redcliffe Oaks.

Her main target up north is the Queensland Oaks.

It was a huge night for Victorian trainers at Redcliffe with Purdon’s success being topped by veteran Victorian John Nicholson and his exciting pacer Sebs Choice in the $106,070 Redcliffe Gold Cup.

Manners proved the key with young Victorian driver Michelle Phillips stepping Sebs Choice to the front from a messy standing-start and always looking in control.

It was a magic moment for Phillips with her first Group 1 success.

Big guns Turn It Up (fourth off 10m) and Mach Shard (fifth of 20m) were far from disgraced after doing plenty of work on the small and tight track.

The locals had some joy with Grant Dixon’s second-best three-year-old Tims A Trooper dug deep to win a hotly contested Redcliffe Derby.

Big guns Teddy Disco (led) and Ripp (death) went hard at each other and couldn’t keep going, while Tims A Trooper and Dangerzone swooped off soft runs with the former prevailing by a half-head.

Of course, Dixon still has the hugely exciting Leap To Fame to return for Saturday week’s Rising Sun and then the Queensland Derby.

The other highlight on the ripper card was yet another major win for Rickie Alchin’s two-year-old Tardelli.

The Brent Lilley-trained daughter of Love You made it 10 wins from her past 11 starts when she toyed with rivals to win the Group 3 Matriarch Trot for mares’.

Despite sitting parked, Queen Elida quickly put her rivals away when driver Chris Alford asked on the home bend and then coasted to an 8.3m win.

She has the Breeders Crown and most likely the Inter Dominion to target when she returns later in the year.

Emerging pacer Like A Wildfire has given trainers Emma Stewart and Clayton Tonkin some serious thinking to do.

A second impressive win from as many starts this campaign had forced them to consider adding him to their team of Queensland raiders booked on a flight on Friday week.

“I said if he came out and won well again, we’d have to give it serious thought,” Tonkin said. “We weren’t going to send him, but he’s come back so well and still has improvement to come.”

Tonkin and Stewart have champion mare Ladies In Red, exciting four-year-old Beyond Delight and high-class mares Maajida booked on the July 8 flight.

Adding merit to Like A Wildfire’s easy all-the-way win was the fact he beat Jess Tubb’s Queensland-bound stablemates Better Eclipse and Triple Eight.

Under the conditions of the race, no more “early” invitations can be issued, but Rock N Roll Doo is one of the most exciting pacers of his age group in Australia and has already travelled to Sydney to win a Group race.

Trainer-driver Mick Stanley thinks the big and raw son of Rock N Roll Heaven is potentially the best horse he has trained.

Rock N Roll Doo made it two wins (and a terrific second) from his three starts this campaign when he toyed with his rivals at Melton last night.

A fit and healthy Magnificent Storm is a thing of beauty.

It’s now clear he wasn’t his stunning self because of some niggling feet issues late last campaign.

But a long break and plenty of patience from veteran trainer Ray Williams and the former Kiwi five-year-old has returned in sparkling form.

Williams wants to chase the Melbourne Inter Dominion late this year and judging by his two wins on the comeback trail, that looks a great plan.

While Magnificent Storm’s first-up win was strong, he looked better and sharper in a dominant display at Gloucester Park last night.

Despite sitting parked outside hot favourite Jumpingjackmac, stand-in driver Aiden De Campo drove with confidence and aggression at times and Magnificent Storm relished it and won easily in a 55.8sec last half and 1min55.2sec mile rate for 2130m.

Jumpingjackmac was awful and dropped-out to finish second-last, while the classy sit-sprinter Diego emerged from a soft trip and ran home into second spot.

Grand old warrior Chicago Bull, who was first-up, dropped out to last and ran home well for third.

“There are a few nice $50,000 races coming up for him, so we’ll go through for now and then make a final call on the Melbourne trip,” Williams said.

Could former Kiwi gelding Slip The Hundy be a Rising Sun smokey?

The Lincoln Royal four-year-old will chase a start via next Saturday night’s $53,040 Group 2 Queensland Sun, a race restricted to Queensland-only trained pacers and where the winner gains automatic entry into the $305,000 Group 1 Rising Sun the week after.

Slip The Hundy has won five of his seven Queensland runs for trainer-driver Narissa McMullen and made a real statement posting a blistering 1min51.8sec mile rate for 1660m winning at Albion Park last Friday night.