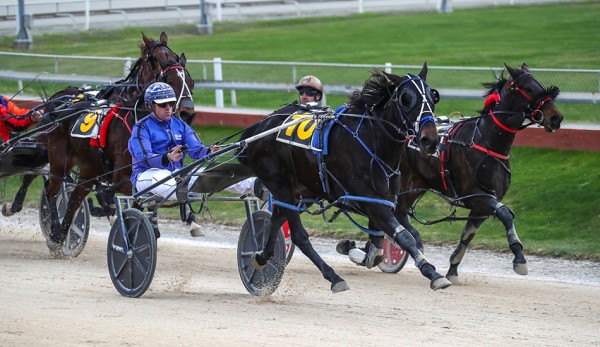 Terry Chmiel went home from Addington Raceway a happy man on Sunday after recording a winning double at the Christchurch track.

Overarm was the first on the board for the Leeston stable when taking out the Nevele R Stud “Young At Heart” Mobile Pace (1980m).

The six-year-old gelding was taken back early from his second-row draw where Chmiel bided his time before improving three-wide down the backstraight on the back of Jenabella. He then guided his charge four-wide turning for home where Overarm was able to run over the top of his rivals to record a comfortable 3-1/2 length victory.

While confident of a good run from Overarm, Chmiel admitted to being slightly surprised at the gelding’s strong turn of foot in the closing stages of the race.

“I was a bit surprised because 1980m really isn’t his go and last start he raced over 2600m on that wet track and he didn’t handle it at all,” he said.

“But he had been racing pretty honest. It was a big drop for him today and he is pretty competitive when he is in that grade. He surprised me with how well he sprinted.”

Later on the card, stablemate Reflectionsofmylife secured a double for Chmiel when winning the Mid-Winter At Addington Mobile Pace (1980m).

Chmiel put the daughter of Changeover to sleep three back on the markers before he was able to find the one-one with 300m to go, and continued their run three-wide down the home straight to win by 1-3/4 lengths over Reinimin.

Chmiel took plenty of confidence out of her last-start runner-up result at Addington a fortnight ago and thought she would be a chance on Sunday.

“She has been going some pretty good races,” he said. “She has been consistent and got the right trip today, which she capitalised on.

“She has always been hitting the line well, but with a good draw and a good run she was always going to be handy.”

Chmiel has now posted 13 training wins and 19 driving wins for the season, and while disappointed in his stable’s tally this season, he said the barn is currently in a rebuilding phase and he is excited about the prospects of a couple of juveniles.

“We are just trying to rebuild. Hopefully we have got some nice ones coming through,” he said.

“I have got two two-year-old trotters that I have given some non-totes earlier on, they have come back pretty good so that is something to look forward to.

“Hopefully they can take that next step.”