Trainer Greg Hunter was a proud man after he helped his family trifecta the race named in their honour at Wyndham on Sunday.

The Hunter family filled the trifecta in the Hunter Family Handicap when the Greg Hunter-trained Cool Scooter sprinted along the passing lane for driver Craig Ferguson to beat Maidonthebeach and Groomsman.

The four-year-old’s victory gave Hunter bragging rights over his cousin, Hamish, who trained the second and third place-getters.

Cool Scooter scored his second consecutive victory and third of the season in Sunday’s 2400m event. 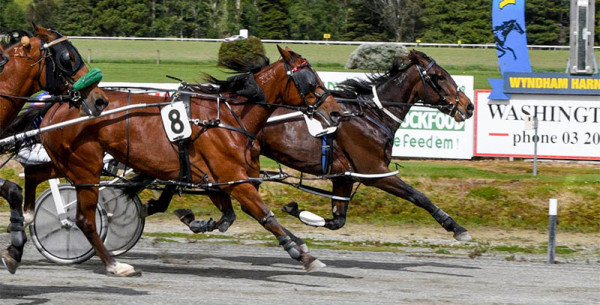 His trainer is hopeful he has one weapon that will help him continue to succeed as he rises in grade.

“It is going to be fairly hard for him, but he does give the impression he likes the speed on in his races,” Hunter said.

“The harder they go, the better it is going to suit him, so that should help him out.”

The Hunter family have made an epic contribution to southern harness racing and their trifecta result came just down the road from where Hamish’s father, Adam Hunter, prepared Trusty Scot to win the 1979 New Zealand Cup.

The Hunter Family Handicap was established by the Hunter families around 50 years ago.

Sunday’s result was not the first time Hunter-trained runners have filled the race trifecta.

Five years ago, Greg produced Press On and Twilight Franco, who ran second and third to Hamish’s Devil May Care.

Heading the trifecta in the race developed by his family delighted Hunter, he said.

Ferguson let the Ross Wilson trained three-year-old stride along at the head of the field before the horse bolted in by ten lengths.

That time took a massive 2.1sec off the previous all-comers record, held jointly by Return To Sender and The Charging Moa.

Robyns Playboy equaled the fastest 2400m time in Southland history with his effort.

He shares that honour with Nek Time, who holds the Winton track record with her 2.53.0 mark set in 2016.

Incredibly, Robyns Playboy could strip an even fitter horse in his next start.

The horse had not started, or had a trial or workout, since his impressive Southland nugget final win at Winton in late September.

The following event on the Wyndham card saw a win by another promising three-year-old.

Yet another promising three-year-old wrapped the Wyndham card with victory.

Trainer Lauren Pearson produced Rise Above This to win her first start of the season.

IT amazing to think Chicago Bull looks back to his best, maybe even a tad better, than before the freakish mishap which almost ended his career in Auckland two years ago.

NZ Cup champion Cruz Bromac could launch his campaign to defend the title as soon as next Saturday.