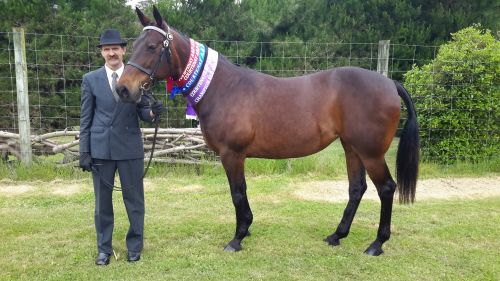 Ali was the first horse I bred for harness racing. But unfortunately she wasn't good enough to race so she went and spent a bit of time in the paddock doing nothing. Not the nicest horse around and not safe to be in the paddock with but enjoys being able to get out and do things.

Then a friend suggested I put her in an inhand show as she had nice movement. We came home with three ribbons in very big class numbers.

We then competed at a large number of shows throughout the season including the Christchurch A&P Show. We picked up several Reserve Champion ribbons over that season and several other top finishes. Over the next couple of years we did just a few shows the last being in late 2014.  Ali then sat in the paddock for a few years doing very little. We did start riding her now and again.

Then in late 2017, for some reason I pulled her out of the paddock and started going to shows again. We had some top results through the season and entered more A&P shows winning the mares class at Courtney A&P two years in a row and the second year going on to win her first Champion ribbon. She has been consistent in her return to the show ring picking up many Reserve Champion ribbons along the way and proving to be one of the top mares around at the time.

We entered the current show season with covid hanging over our heads and Ali a year older (now 18 years old). Covid has had a vast effect on this years show season with many shows cancelled or run in a reduced capacity for the A&P shows. We headed to Ashburton with both show horses and Ali was back to her best winning  the Ashburton A&P Show. A great start to the season.

In her only other show this season she finished 3rd at Courtney (behind my other show horse who went Reserve Champion). And at Courtney she won one of her other classes. But she had done enough to qualify for the 2022 Horse of the Year Show in Hastings.